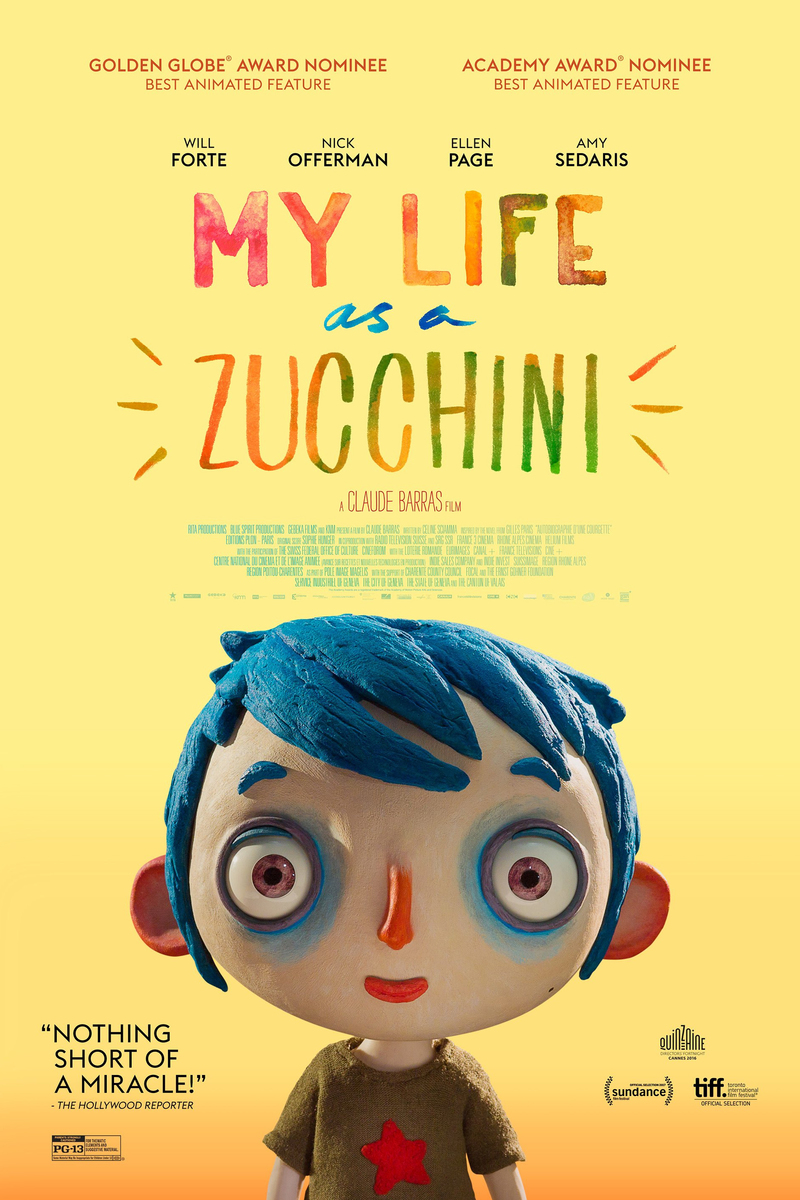 Young Icare (voiced by Gaspard Schlatter,) also known as Zucchini, lives with his alcoholic single mother in a sparse, dingy apartment. When he accidently knocks his mom down a set of stairs and kills her, he is taken to live in a foster home with other troubled kids, where he eventually falls for Camille (Sixtine Murat) and vows to save her from her abusive aunt. My Life as a Zucchini is a tender stop-motion animation film that sports an extremely odd but expressive visual style. The animation might be off-putting at first, but I was startled by how much emotion the characters showed.

There are some truly emotional moments in this movie, however, I had some issues with it that prevented me from giving it a higher rating. First, the kids’ dialogue is sometimes way too precocious and on-the-nose, their exchanges can feel a little too saccharine and unnatural at times. For instance, the foster home’s resident bully, Simon (Paulin Jaccoud) says something at one point along the lines of “We are all alike. There is no one left to love us.” Later Zucchini talks about having dreams where he is grown up, still lives with his mother, and ‘drinks a lot of beer’ just like her, stating that that’s why he’s glad he left. These moments detracted from the experience for me, because it struck me as very forced and unrealistic.

Another problem is that probably due to the film’s extreme brevity (1 hour 10 minutes), the character dynamics and relationships shift far too quickly to be realistic. In one scene Simon, in a moment of anger, slams Zucchini against the floor with what seems like a lot of force. A moment later they are embracing. Everything moves very, very quickly, which makes it harder to connect to the situations and the characters. The film could have probably used to be longer, to create a more immersive experience.

My Life as a Zucchini is not really for children, although to be honest I don’t think most kids would be particularly drawn to this one. The film contains themes of sexual abuse, incest, alcoholism, suicide, drug abuse, and domestic abuse, though as a whole they are sensitively handled. I certainly think there’s an audience for this movie, and I definitely think it’s worth watching, but I also think it’s overrated based on the Rotten Tomatoes score and the fair amount of hype in the indie circuit. It’s sweet, well-crafted, but ultimately fairly forgettable. Zootopia deservedly beat it in the Academy Awards, but that doesn’t mean My Life as a Zucchini is to be dismissed entirely. It’s a very genuine little film, one that you can tell the director cares about deeply. And it draws a lot of soulfulness out of it’s characters, who inhabit a world that is strangely compelling, visually striking, and not entirely unlike our own.