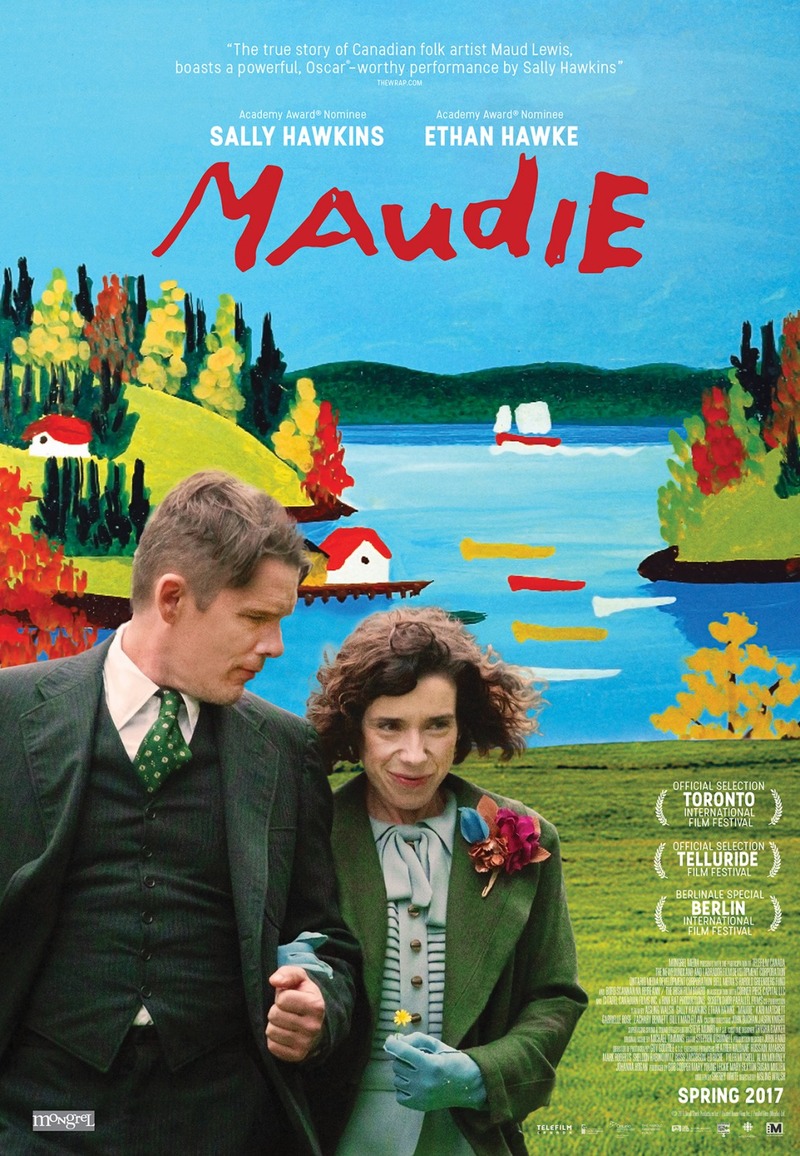 Sally Hawkins gives a tender, affecting performance in this emotional biopic of Maud Lewis, an arthritic folk painter living in Nova Scotia with an aunt (Gabrielle Rose) who belittles and infantilizes her. Physically impaired but determined  to be independent, Maud starts working as hired help for Everett, a volatile man-baby with a possible undiagnosed mental disorder. Everett initially treats Maud like a stray dog, but the two eventually form a strange relationship as Maud asserts a higher level of control over her employer.

Going into this movie I initially expected a sweet love story between outcasts, but what I got was decidedly darker study of a woman’s troubled, complicated relationship  with a man who both physically and psychologically abuses her but gradually grows to develop a certain level of caring for her. Everett experiences no great turning point, which is part of what makes his character believable, he essentially remains a self-centered, inarticulate curmudgeon for the entirety of the film. He sporadically has moments of complexity and tenderness, but ultimately, Everett is what he is, and Maud accepts him unconditionally, even though it is clear to the viewer that she can do better.

Ethan Hawke is Sally Hawkins’ equal, lending nuance to a character that could have been very one-note. It is hard to not to feel compassion for his character at certain moments throughout this film, even though overall he is a rather awful man. The majority of the film concentrates on the relationship between Everett and Maud, and Maud’s career as a folk painter is given secondary priority. Rather than portraying it’s disabled central character as weak and helpless, Maudie lets it’s protagonist’s tenacity shine through her fragile exterior from beginning to end.

I have enjoyed Sally Hawkins in many movies over the years (Vera Drake, Happy-Go-Lucky, Paddington) but I’ve never paid much attention to Ethan Hawke’s career. He and Sally Hawkins make a monumental acting team, both spectacular and neither one managing to quite outact the other. Maudie is all about the relationships between it’s characters, and Maud herself is a fascinating character, grabbing the viewer’s attention from the very beginning of the movie and not letting go until the bittersweet conclusion. I recommend Maudie to people who are sick of the same old Hollywood films, and want a quiet relationship-based movie with little action but momentous character dynamics and performances.