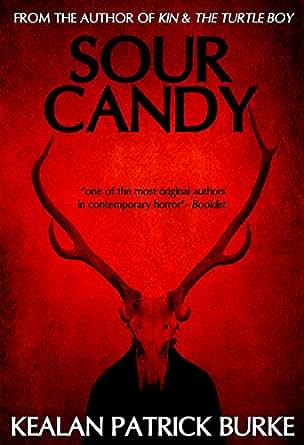 Sour Candy is an extremely quick read that can be easily finished in one sitting, centered around a man named Phil Pendleton who is taken over by dark forces after a encounter with a strange little boy and his ‘mother’ during a grocery trip. I don’t want to spoil too much of this novella (actually, as short as it is Sour Candy might be better described as a novelette,) because I want people who decide to read this book to figure out the details themselves.

Suffice to say, this is a spooky, innovative story that plays on the fear of parenthood, and what it lacks in character development (due partially to it’s brevity) it makes up for in the creativity of it’s premise. It definitely has a The Twilight Zone-esque vibe and while it plays on the ‘small children are scary’ trope, it manages to do something totally new with it. I didn’t see the ending coming and that’s partially what endeared it to me, and the body horror elements managed to make me squirm in my seat. I did notice some clichés in the writing, but nothing too distracting and nothing that made me feel the prose wasn’t pretty quality as a whole. I couldn’t help but feel sympathy for poor Phil when the child’s presence started to take over his whole life, and there was something so undeniably creepy about the whole situation.

Kealan Patrick Burke does a good job of eliciting horror and discomfort while using minimal blood and gore tactics to get readers’ attention. I did think that if the creepy little boy, Adam, had done a better job of acting ‘normal’ when he was interacting with Phil rather than immediately acting creepy and fucked-up, the novella might have been even scarier. It would have left us questioning Phil’s sanity more and having a weird demon kid who was better at faking being a real kid might have actually intensified the scare factor.

Nevertheless, I enjoyed this book and I really liked the fact that it was totally different from anything I’d ever read before. I don’t read a lot of horror fiction but I used to watch a lot of movies and horror was one of my favorite genres. A lot of horror is very same-old, same-old (zombie apocalypses, crazed slashers, haunted houses) but I appreciated that Burke was able to give readers something that felt fresh and original, and that you honestly didn’t know how it was going to end. I would definitely be interested in reading some more of this writer’s work, assuming that his books remain as consistently creepy and wickedly clever as this one.