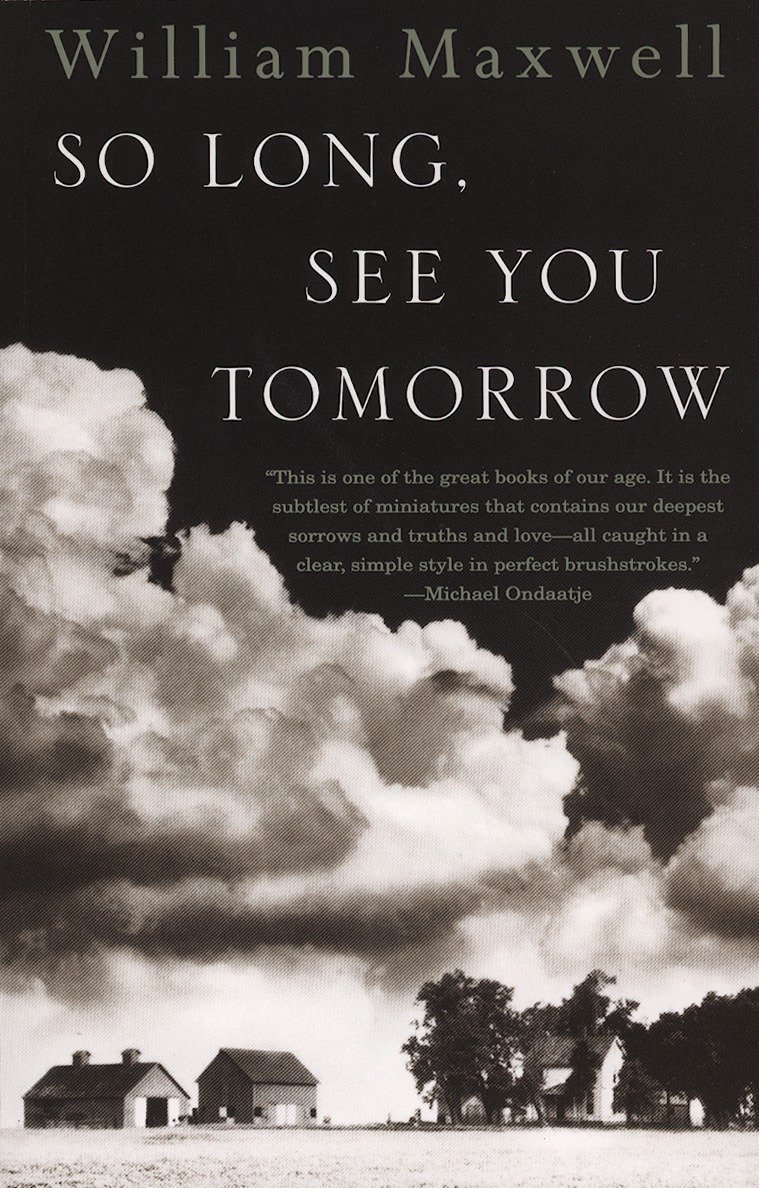 Title: So Long, See You Tomorrow

The unnamed narrator of So Long, See You Tomorrow looks back on his youth and the misfortunes that befell a childhood friend when his father murdered another man and then committed suicide. The murderer’s son, Cletus, is ignored by the protagonist after Cletus’ father’s actions rock the community and the narrator, now an old man, tries to make sense of the events leading up to the murder.

There were such strong similarities between the main character in this novel’s family situation and that of Bunny Morrison in They Came Like Swallows (the first book I read by William Maxwell)  that at first I thought that So Long, See You Tomorrow was a sequel to They Came Like Swallows and the unnamed character was an older Bunny. It turns out that a lot of William Maxwell’s writing is semi-autobiographical and he used certain themes and family relationships repeatedly. I kind of wish that the main character was Bunny, that would have been interesting.

I think the main character and Cletus’ friendship should have been developed more. they hardly have any scenes together at all, and I think if there had been more of a sense of camaraderie and companionship between them, the book would have had more emotional heft. I didn’t like this book as much as They Came Like Swallows, partially because I didn’t care about the characters in So Long, See You Tomorrow that much. The only character I was really invested in was Cletus’ dog, Trixie.

I also wasn’t sure how I felt about so many of the scenes having been improvised by the main character because he couldn’t possibly have been there to witness them. I felt it took away from the potency of the situations that were being portrayed since most of them were pretty much being made up by the protagonist. I found the theme of memory in this novel fascinating and like They Came Like Swallows, it was beautifully written. In fact, there was one excerpt I liked so much that I read it out loud to my mom and then copied it down into one of my many notebooks. Overall, though, this novel left me a little cold. I think it might have been because I read it right after They Came Like Swallows and they have so many similarities.

I think if I had waited a while after reading They Came Like Swallows to read this, I might have enjoyed it more. To be fair, most of the traits the two novels share in common don’t have much to do with the main plot, but the main character and his family were almost exactly the same; sensitive boy, amputee older brother, emotionally distant father, mother who died of Spanish flu. I know these were probably all elements of William Maxwell’s life, but at times I felt like I was watching a rerun and the main character was a knock-off of Bunny Morrison who wasn’t enough of an individual to even be given a name. I recommend this novel because it’s very well-written and it kept my interest, but I think They Came Like Swallows is better and I think people who are interested in this author should read that one first.

2 thoughts on “Book Review: So Long, See You Tomorrow by William Maxwell”