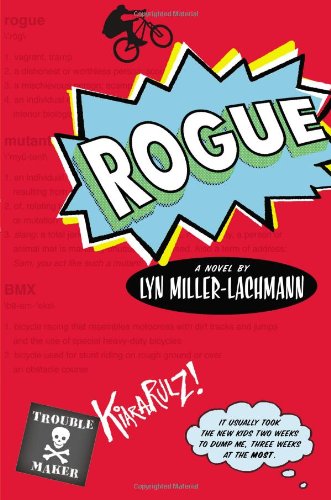 Kiara has never been able to fit in with her peers- emotionally immature, prone to meltdowns, and socially awkward, her only friends are the mutants she finds herself identifying with in her X-Men comics. Her mom has left the family and her dad tries to support her but can barely keep his own head above water, he is in denial about the very real possibility that his daughter has undiagnosed Asperger’s.

When a boy named Chad moves in next door, Kiara immediately tries to befriend him but Chad immediately sees her as someone who’s easy to exploit and treats her like crap. When Kiara finds out about what’s actually going on in Chad’s household, she wants to help him and his little brother but doesn’t know how to deal with the situation. Even though she’s very bright, her interpersonal skills are closer to those of a little kid and every time she tries to take action and make a situation better it only seems to get worse.

Rogue was surprisingly dark for a middle-grade novel, with child abuse, methamphetamines, alcoholism, and parental abandonment all making an appearance. I found Kiara to be a very compelling character and I really appreciated that she felt so real and not at all like a stereotype of what a person with Asperger’s ‘should’ act like. I would partly credit this to the author actually being on the autism spectrum, I have no  problem with neurotypical people deciding to write about characters with Asperger’s or autism but they tend to pigeonhole them into a collection of symptoms instead of making them feel like real people.

There were parts of this book that broke my heart and I felt so bad for Kiara because of all the shit she was going through while also wanting to grab her and shake her at times for being so obtuse and making things so much more difficult for herself and others. I saw a little bit of myself in her at times, especially when I was much younger. I think the main criticism I had with this book was the ending.  While the majority of the story felt messy and complicated, and thus more realistic, the ending tied everything up a little too neatly.

It’s not like a wanted an ending that was miserable, but it seemed like everything started going right for Kiara and her family in the last couple of chapters. For the most part, however, this book sucked me into it’s world 100% and I wish that more people knew about it. It takes it’s rightful place alongside books like The Curious Incident of the Dog in the Night-Time, Marcelo in the Real World, and When My Heart Joins the Thousand as a truly special novel about a young person on the autism spectrum.

One thought on “Book Review: Rogue by Lyn Miller-Lachmann”