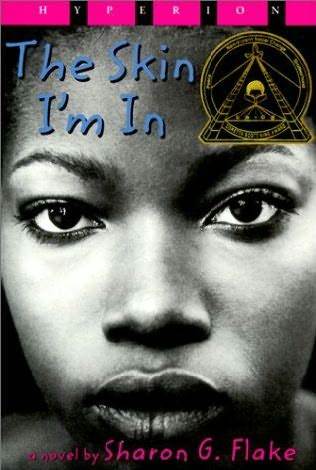 Title: The Skin I’m In

The Skin I’m In is a ground-breaking book for young adults that offers a sensitive portrayal of colorism, which is a social issue a surprisingly large amount of people don’t seem to know about. The protagonist is a twelve-year-old black girl named Maleeka who is very smart, but has extremely low self-esteem. The other black students at her school constantly make fun of her because her skin is much darker than theirs, like looking ‘blacker’ makes her ugly and inferior.

We find out Maleeka could have gotten enrolled in a much more advanced school, but she feels unworthy of moving up in the world. Maleeka’s life changes when she gets a new teacher who’s interested in actually teaching, and refuses to give up on the students or just push them mindlessly through their studies. Miss Saunders has a birthmark covering a large part of her face, and she begins to see Maleeka’s potential and wants to help her. However Maleeka’s ‘best friend’ is a bully who gives her pretty clothes so she won’t be a teasing magnet is exchange for her subservience, and Maleeka has to find the courage to break the girl’s toxic influence on her is she wants to grow.

The dark-skinned model on the cover of this book is beautiful, but she presented some confusion for me while reading. In the book Maleeka is only twelve but the girl on the cover looks WAY older. I would say Maleeka seems somewhat naïve and immature for her age so it was hard to remember how young she was supposed to be. I liked Maleeka’s character and her flaws made her feel very believable. My favorite part of the book was the plotline with her discovering herself as a writing.

Her writing tended to be immature but at the same time you could definitely see her potential for having an enormous amount of talent. I really liked the way Miss Saunders guided her with her writing and how it gave her an outlet for her loneliness and frustration. Some of the bullying Maleeka suffers feels pretty juvenile, like it’s coming from Kindergarteners, not middle schoolers.

On the other hand, a ‘best friend’ who seems potentially sociopathic and a harrowing attempted rape scene midway through the book made the story feel tonally jarring at times. I thought the ending wrapped things up a little too neatly and I wish Maleeka had stood up for herself a little sooner but I was also left wishing I could follow her character into her teenage years and see her develop a positive self-image and blossom as a writer. She is a sympathetic and unique character in a sometimes uneven novel that still deserves to have an audience.

One thought on “Book Review: The Skin I’m In by Sharon G. Flake”