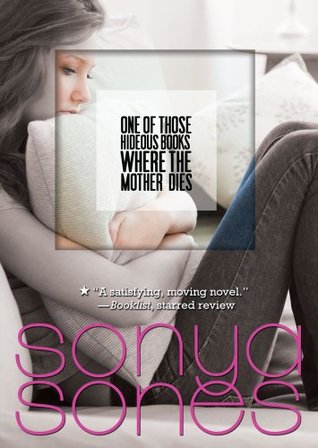 Title: One of Those Hideous Books Where the Mother Dies

While Sonya Sones’ books are nice quick reads, they’re not the type of thing anyone would be likely to describe as ‘great literature.’ In general they’re stories women are probably going to outgrow once they’ve stopped being teenage girls. Sometimes I still like a lightweight young adult book about girls who are full of angst and heartbreak, though. And out of the four books I’ve read by Sonya Sones, this one turned out to be the best- with a great title, to boot!

Ruby’s dad left when she was a baby and she’s spent her whole life being raised by her sometimes difficult but loving mom. When Ruby’s mother dies of cancer (hideously,) she is shipped off to LA to live with her dad. Suddenly Ruby’s whole lifestyle gets turned upside down, because dad (who somehow answers to ‘Whip Logan’) is a mega-wealthy and successful movie star whose home and worldly goods extend beyond his daughter’s wildest dreams. Ruby isn’t interested in the money or the expensive gifts her dad lavishes upon her, she hates him for failing to be part of her life and she misses the people back home. However, unexpected things begin to happen that cause her to start considering a happier future.

Ruby was such a kid, but I mean that in a good way. Even though the way she handled her problems was immature, I could totally empathize with her frustration and her lack of agency in a bizarre situation. I’ll admit that I did take issue with the way Ruby doesn’t seem to prioritize her mother’s death over having to leave her boyfriend behind (at least at first,) but I liked the way her relationship with her father developed.

Beginning to look at a parent from a slightly different perspective is often a big part of growing up and this book sensitively portrays that issue, albeit within an unusual set of circumstances. It was sometimes irritating the way Ruby obsessed over boys so much (pretty much a staple in Sonya Sones books,) but the story kept my attention throughout and ended on just the right note.

One thought on “Book Review: One of Those Hideous Books Where the Mother Dies by Sonya Sones”