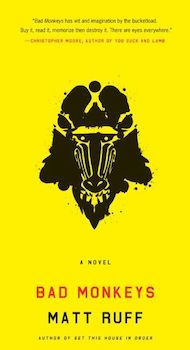 This is one of those novels with an out-there crazy plot that’s hard to describe, and it’s definitely not the kind of book that would make me grab a copy first chance I got. It was one of those instances where I read the synopsis and went okay, great, but what is this actually about? That does it a disservice, really, because Bad Monkeys is actually pretty awesome. It’s one of those books that is really hard to put down because it’s literally impossible to predict what direction it’s going in. In the opening scene a psychiatrist is interviewing a woman named Jane Charlotte, who’s been arrested for murder.

From the very beginning, we suspect Jane Charlotte is not all that tightly put together, mentally speaking. She’s all too eager to tell the doc the details of her life story, and how she’s actually a member of a super technologically advanced vigilante group called the Bad Monkeys. The Bad Monkeys have made it their goal in life to take out really bad people, members of society whose demise would really do others a favor. The psychiatrist seems skeptical but intrigued, and the longer Jane Charlotte’s story goes on the more her own deviant tendencies come out into the open.

It’s hard to say what subgenres this book fits in, there’s science fiction elements but mixed in with all the other insanity they don’t seem all that out of the ordinary. I found this book fun to read but some people might find it unnecessarily dark and upsetting, because there’s a lot of material involving sexual abuse in it. None of it is all that graphic but there’s a genuinely bleak vibe to the events in the story, whether they be real or psychotically imagined.

I got a kick out of all the oddball technologies the Bad Monkeys use for widespread surveillance, you don’t need to be a pervert to be freaked the fuck out by the way they invade your privacy! It was totally unlike anything I’d ever read before and I loved his seemingly boundless imagination. I would say that things got a little bit confusing around the end, especially when it went from more realistic to The Matrix-style fight sequences, doppelgangers, and explosions galore. I was impressed at how well the twist worked, honestly. It twisted my brain into a knot a little bit but at least it’s not something most people will see coming.

One thought on “Book Review: Bad Monkeys by Matt Ruff”