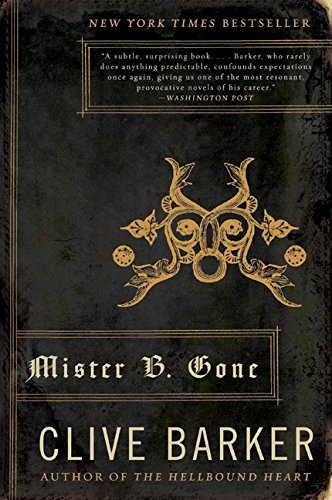 Mister B. Gone is the first book I’ve ever read by hugely successful horror writer Clive Barker, and it’s one of the most audacious and original stories I’ve read in a long time. It’s narrated by the unforgettable anti-hero (or possibly just villain protagonist) Jakabob Botch, who urges the reader to put down the book in a manner reminiscent of Lemony Snicket. Jakabob is a demon, and he didn’t even have the luxury of sinning in life before being cast into the depths of hell.

He was BORN in hell, the only son of a sadistically abusive father whose job was literally to torture the souls of the damned before coming home to get drunk and terrorize his family. After a particularly eventful day where Jakabob has his face horribly burned, commits patricide, and is caught in a trap fashioned by deranged men and pulled up to earth he is forced to contend with the world of the living and finds himself witnessing (and committing) a number of atrocities.

While our reluctant protagonist is thoroughly lacking in redeeming qualities, it isn’t hard to see how he grows up without any options except to be a complete monster and how ironically, leaving hell ends up making him even worse. However, it’s on earth where he experiences falling in love (with another demon who accompanies him on his travels,) has his soot-black heart unceremoniously broken, and discovers the ingenuity and the endless savagery of mankind as well as the surprising apathy of heaven.

It’s kind of a coming-of-age story, however profoundly odd, accompanied by scenes of almost cartoonish butchery and misanthropic satire of humanity. There are a few people who are basically okay but they are few and far between. I actually didn’t find this book to be all that anti-religion (at least not as much as I thought it might be) but it still has the potential to offend many readers. The only criticism I have is that it dragged a little bit in the end, otherwise I found it to be an immensely entertaining story that somehow manages to pull of it’s bonkers premise.

4 thoughts on “Book Review: Mister B. Gone by Clive Barker”