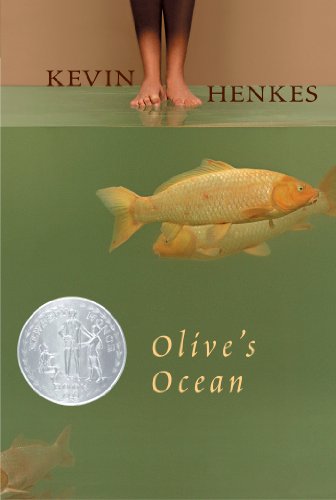 It’s hard to believe that this book has been around since I was a kid and I hadn’t taken the time to read it until now. I found myself admonishing myself a little bit for waiting so long with Olive’s Ocean, because it’s portrayal of childhood has an authenticity you don’t see very often. Even though it’s from the writer who’s famous for his picture books about anthropomorphic mice, Olive’s Ocean is not a particularly light or cheery story (although it never becomes depressing or devoid of hope either.)

The main character is a pre-teen girl named Martha who finds out at the very beginning of the book that her classmate Olive has been killed in a freak accident. Martha wasn’t friends with Olive and she didn’t know her that well, but when she finds out that Olive shared a secret wish to be a writer and that she considered Martha the ‘nicest girl in the whole class,’ Martha can’t get her out of her head.

Olive was excluded by her peers and even though Martha never picked on her like other people did, she began to wish she had made an effort to be kinder to her. Right after Olive’s untimely death Martha goes on vacation with her family to her grandma’s beachside house, and she finds herself growing up quickly as she becomes aware of some difficult realities and gets her first crush on a boy.

Kevin Henkes does an unsettlingly good job getting inside the head of a pre-teen girl, one who’s both extremely bright and quite sheltered in some ways. Martha’s grandma is both warm and supportive and she finds herself choosing to confide in her more than with her parents. The book isn’t particularly plot-driven, instead focusing on Martha’s character as she navigates wanting to be a writer with very age-appropriate insecurities and arguments with her family.

She feels like her moody older brother is ‘outgrowing’ her and clashes with her parents, especially her mother. All the characters seem like real people and Martha’s increasing awareness of mortality is well-written but doesn’t dominate the narrative. I really liked the way the author described the atmosphere of the beachside setting and made the reader feel like they were there. The premise of the novel reminded me of Remembering Raquel but that book was all about the girl who had died, whereas Olive is more of a catalyst here.

Almost everybody in Remembering Raquel was also really negative and mean-spirited about the title character even after she died whereas Olive was more just taken for granted. I liked both books but I think I probably liked Olive’s Ocean better, and even though it’s been challenged and banned multiple times throughout the years I don’t feel like there’s anything inappropriate for middle school-aged kids, other than the premise being a bit too sad for some. I think they’ll actually find it really relatable because Kevin Henkes seems to remember what being this age is like and he doesn’t talk down to his young readers about how lonely being twelve can be.