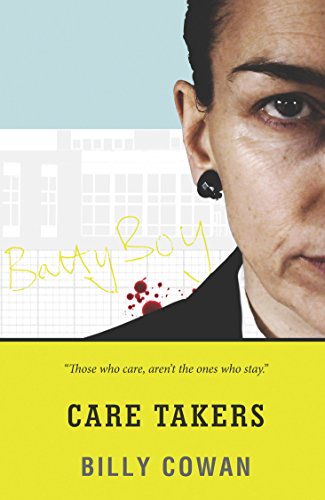 Care Takers is a hidden gem that I think more people should know about, unfortunately it’s very obscure and the cover illustration doesn’t do it any favors. It’s a two-person play with a really simple set-up, an inexperienced young high school teacher is concerned about a boy in her class who she thinks is being bullied. She goes to discuss it with the deputy head of the school, but she can’t get her to take it seriously.

The deputy head, Mrs. Rutter, cares more about getting ahead and grading students’ scores in angry red pen then she does her actual students. The younger woman, Rachel, believes that her student Jamie is being bullied because he’s gay and that it’s causing him to self-harm and creating a disturbing shift in his behavior. Mrs. Rutter becomes increasingly insinuating about Rachel’s motivations and tries to make her question her impassioned stance on the situation.

Unfortunately, as a scathing indictment of the school system this play probably isn’t too far off the mark. The ending is fairly predictable, but the interplay between the two women is really interesting to read. Mrs. Rutter’s complete lack of compassion and close-mindedness are kept more ambiguous at first, especially since Rachel does come off as painfully naïve at times. At the end, however, both her callous disregard for her students and virulent homophobia are on naked display.

She reminded me a little of Nurse Ratchet at times, the way she hid her hatred and total lack of empathy under a mask of pragmatism (come to think of it, her name is even a little bit similar and has the same guttural ugliness.) As bad as she was, I found her to be a believable character and the writer avoids making her a caricature who can be pinned down and analyzed easily. This play was a worthwhile way to spend a couple of dollars on Kindle and I’ll being keeping an eye out for Billy Cowan’s other work in the future.

One thought on “Book Review: Care Takers by Billy Cowan”