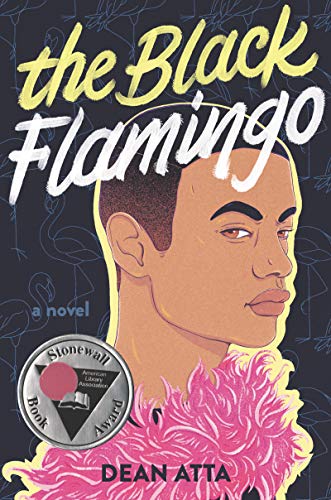 Consider this review sort of a homing signal to readers who didn’t think The Black Flamingo was an amazing indispensable work of art. Guys, I know you’re out there. Why do I feel so alone? The thing is, I was really excited to read this book because I fully expected it to be something I would enjoy. Needless to say, I was badly disappointed because the first 1/3 or so of this book was great and then it just started going downhill. At a certain point I was fed up with it but decided to force myself to finish it just for the sake of finishing it.

The Black Flamingo follows Michael, a mixed-race boy who early on begins to realize that he’s gay. Michael is what you might call a more ‘classic’ example of a gay male- he surrounds himself with female playmates, plays with Barbie dolls, and enjoys cross-dressing. There’s nothing wrong with that but his character doesn’t have that much else to him.

When I think back on Michael’s character, his sexuality immediately comes to mind but not much else. The parts of the book where Michael is a child held my attention well enough, but eventually he goes off to college and The Black Flamingo suddenly remembers it’s an issues book. That means that every page gives a didactic-as-fuck sermon about racism, with white characters dutifully performing ‘microaggressions’ that about as micro as a Klansman burning a cross in unwelcome neighbor’s yard.

Then the non-white characters go to painfully obvious lengths to explain all the problems with race in our country to Michael (and us.) Look, I pick up a book for a good story with interesting characters, not a heavy-handed moral lesson about all the different kinds of racism and how they hurt minorities. Sure, there’s lots of preaching about sexual and gender identity to and it feels like Dean Atta wants to fit every hot-button issue in there. And then there’s multiple points where the writing is just offensively lazy and bad. Take Michael’s female friend for example, who right off the bat is displaying signs of internalized racism.

Female Friend: Gay guys are great, but lesbians are the worst. I mean, gross!

Michael: That statement is homophobic and guess what, we’re not friends anymore.

Female Friend: Well, I sorted a few things out and I realized I’m actually a lesbian who was exhibiting internalized homophobia! I have a girlfriend now!

Come on, these issues are worth exploring but don’t insult my goddamn intelligence. Dean Atta has written a book before titles I Am Not Your Nigger, which shows that since he is gay and black and he had already unanimously decided he was James Baldwin (gay, black, critically acclaimed author of many works including I Am Not Your Negro) by the time he published his first book. The only good things about this book is the beginning and that I learned a few things about drag culture that I didn’t know before. Otherwise, this is one of the most over-rated books I’ve read in a long time.

One thought on “Book Review: The Black Flamingo by Dean Atta”