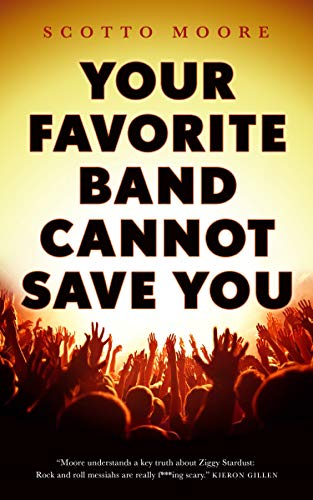 Title: Your Favorite Band Cannot Save You

Your Favorite Band Cannot Save You has a cool title and a cool premise, but those are pretty much the only two redeeming things about it. It’s a frenetic, over-the-top story about a music blogger who accidentally discovers a band called Beautiful Remorse, and soon finds out that there’s something really, really odd going on with it’s songs and the effects they’re having on listeners.

People who discover this underground group are mesmerized by it, they lose their sense of self and practically cream themselves in their chairs with hysterical sexual ecstasy. They can’t listen to anything else or they become charged-up and violent like the zombies from 28 Days Later (or an average Black Friday shopper at any Wal-Mart in America.) The main character is not overly concerned that society as we know it is collapsing as Beautiful Remorse becomes a worldwide sensation, however he is thrilled when he gets the chance to meet the lead singer and bend to her and the rest of the girl band from hell’s evil whims.

One of the main problems with this book is how it manages to lapse into unmitigated silliness halfway through while completely forgetting to be funny, or even fun for that matter. It seems fitting that the protagonist is never given a first or last name (a literary trend I’m getting increasingly sick and tired of) because I can’t remember the last time a book’s narrator has had so little character development or reason to give a single shit about anything that happened to him. I mean sure, he’s a music blogger, but other than that I don’t know a damn thing about him. Family? Background? Likes or Dislikes?

There were a lot of moments where I didn’t know if he was being influenced by evil forces or if he just didn’t give a shit about anybody due to an straight-out lack of conscience. He seemed to lack normal human emotions but I thought that was probably due to lazy writing more than anything else. In fact, there wasn’t a single character in the damn book who made me care whether they lived or died. It was short so I just went ahead and read to the end and rejoiced that it was finally over. Somebody else could probably have taken this general premise and made it awesome but this was just a waste of time.

One thought on “Book Review: Your Favorite Band Cannot Save You by Scotto Moore”